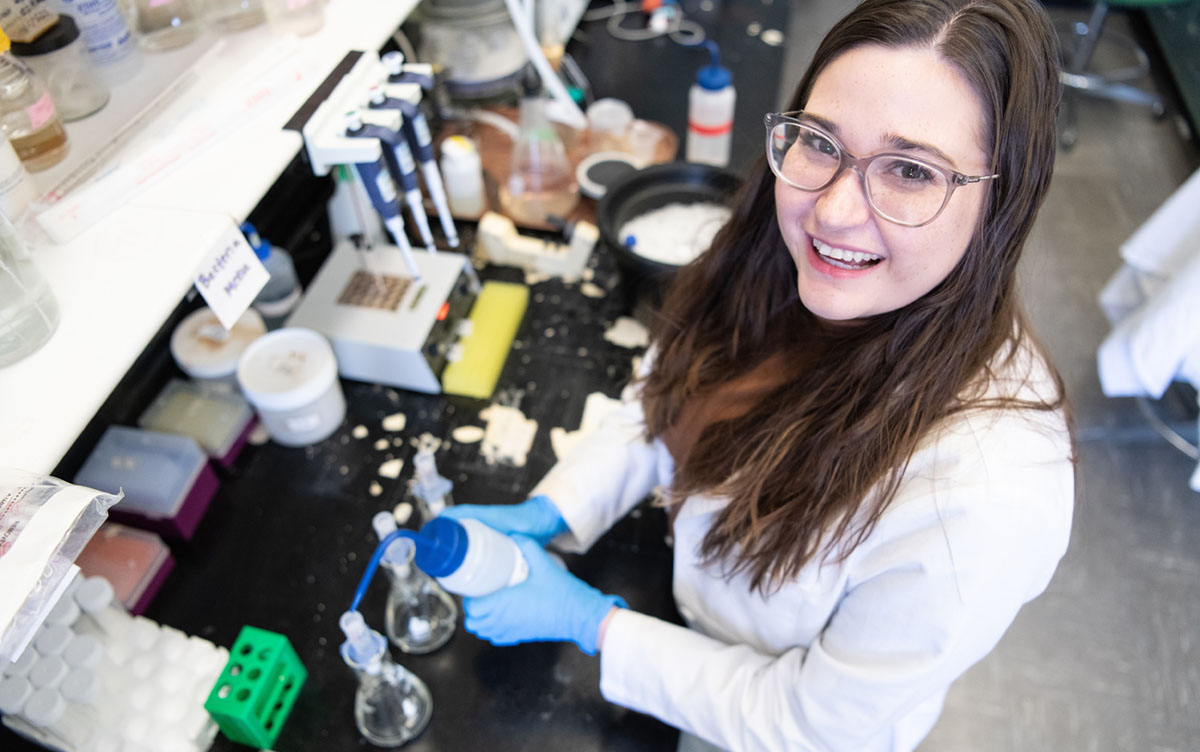 The unexpected is often the most exciting aspect of research. Especially for graduate students like Caitlin Hyland.
Hyland, a fifth-year PhD student in cell and molecular biology, is examining the hypothesis of whether mis-regulated cell-to-cell communication leads to human disease. Or, would mis-regulated cell-to-cell communication be embryonic lethal—which means the organism dies before achieving adulthood.
Hyland, in collaboration with the laboratory of molecular biologist Kathyrn Iovine, is working with zebrafish as a model, as it is accessible to Clustered Regularly Interspaced Short Palindromic Repeats (CRISPR) gene editing—a sort of cut and paste tool for genetic researchers. The zebrafish also has a relatively short life cycle, reproduces rapidly and its system corresponds to the mammalian system in many aspects and shares much of human genetic code.
Since its eggs are fertilized and develop outside the mother’s body, it is an ideal model organism for studying early development. These small tropical fresh-water fish reside in the waters of India, Pakistan, and Bhutan. Hyland doesn’t need to go that far—her zebrafish are housed in the laboratory of cell biologist Matthias Falk in Iacocca Hall.
“The question of mis-regulated cell communication is a critical question that needs an answer,” says Hyland. “This is because genetic mutations in gap junction [the structure that is used for direct cell-cell communication] can cause a number of diseases.” Whether or not an impaired turnover could be a disease mechanism isn’t known.
“My love of genetics actually started in undergrad,” says Hyland. “At Moravian [College], I was originally interested in environmental science as a major. I took a genetics course and I fell in love with it.”
As her supervisor, Falk, professor of biological sciences, says his goal is to give Caitlin, as with every previous PhD graduate student, all the chances he can to succeed in biological research. “This includes regular work discussions, advice, suggestions, troubleshooting, everything that is needed to be competitive in the STEM field.”
Of his grad student, Falk says, “Caitlin is amazingly independent, motivated, and never gives up until she reaches her goal.” Falk is also pleased with Hyland’s leadership role. “Recently, I described Caitlin to one of my colleagues as a graduate student, technician, lab manager, and postdoc all in one!”
Sometimes too much communication is a bad thing 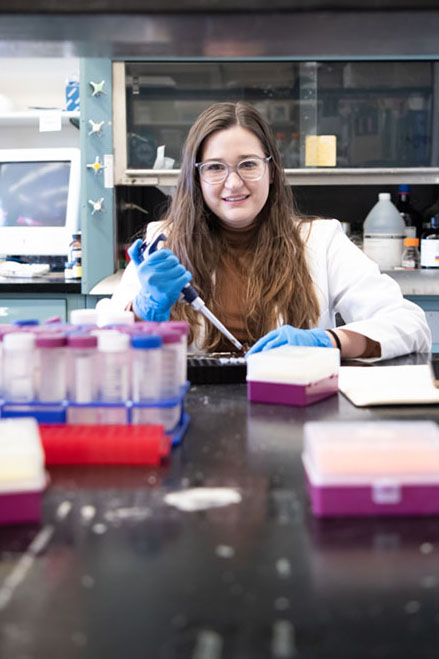 Biochemical and electrical messages are the way cells communicate with one another. Communication must go on at a regulated pace at molecular level and a cellular level. Cells must know how and when to divide and migrate. Cell communication is what can trigger positive or negative changes in the cells. Mutations in gap junction channel protein encoding genes can result in a number of diseases, that include deafness, cataracts, severe dermatological disorders, and cancer.
Hyland sees a similarity between mis-regulated communication and your raucous relatives around the holidays. Everyone is talking about all different topics. For one person (or cell) it is difficult to listen or tune in to just one conversation and make heads or tails of the discussion.
Go back to early science class and remember that amino acids make up our DNA. They then bond together to make long chains, or proteins. Mutations of amino acids that are critical regulators of gap junction turnover will be embryonic lethal. Developing organisms must communicate solidly, but with genetic mutations the communication increases. It’s too much for embryonic cells and they won’t be able to divide and migrate to their respective tissue sites. At the cellular level, connexins, proteins that regulate cell function, are the primary components of gap junctions and control cell migration.
Hyland was surprised by discoveries she hadn’t anticipated.
First, she believed that mutations in cellular communication would be embryonic lethal. “But the development wasn’t bad,” admitted Hyland. “Somehow the organism came up with a plan B.” Hyland noticed the zebrafish overcame the changes. Eventually the mutations caught up with the organism. “Unfortunately, the zebrafish cannot compensate for the mutations as it gets older.”
Falk was puzzled by Hyland’s findings. “We also struggle with the fact that only a percentage of the offspring shows early embryonic lethality, and we hypothesize that a related connexin in fish, the Cx40.8 [protein] can partially compensate the function of Cx43.” Falk says he’s looking forward to trying to prove this in the near future.
Secondly, blood vessels of the Cx43 zebrafish grew larger, and less organized. “The blood vessel phenotype is being affected,” says Hyland. This can affect many aspects of cardiac function. Previous research identified a heart-specific protein that protects against arrhythmia. “But we saw that cardiac myocytes--which rely on electrical signals—with a Cx43 protein mutation, there’s too much signaling and no control, so arrythmias may occur.”
Falk was surprised by her findings. “Yes, unexpectedly for me, we seem to see a number of heart-related issues, although thinking back this is not too surprising as the role of gap junctions for normal heart function is well documented,” he says.
Additionally, Hyland noted that the Cx43 zebrafish fin bones grew larger and longer as compared to normal zebrafish. Hyland measures bones with a particular dye that is taken up by calcium in the bones. Under special lighting it fluoresces (glows in the dark). Full disclosure: zebrafish can regenerate their fins. However, with the mutation, bones develop not impaired, but differently.
The implications are enormous. “I’ve opened so many doors,” says Hyland. “It’s going to be tough, but I have to reign it in.”
Hyland is looking to publish her findings in scientific journals in 2020, but her full dissertation will come in 2021. She has been knee-deep in research at Lehigh, but envisions working in a corporate setting in research and development for drugs or vaccines.
Hyland believes that there’s much more to uncover. “The one thing I’d want people to know is that taking a genetic test and finding that you carry a particular gene isn’t indicative of whether or not you’ll get that disease or condition.” She points out that there are so many factors (including C43 protein) that affect how the body and body’s systems overcome any manifestation of that disease or condition.
“Research is showing that it’s not just a simple genetic mutation that causes disease,” she says. “Proteins and genes are regulated by other factors. Treating disease is a complicated process. I know it’s hard, but I’m hoping for people to be patient, we’re learning so much.”
Story by Bernadette Sukley
Images by Christine Kreschollek 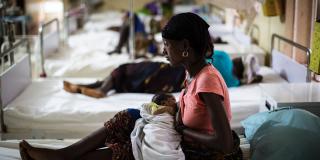 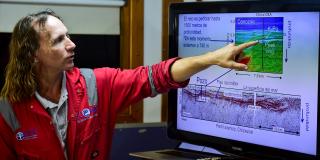 Drilling Into What Killed the Dinosaurs 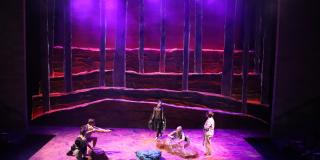 As the World Burns
More News & Spotlights
Contact Us