The arts and humanities building at California State University at Chico is a cornerstone between the University and the town. It is also the location of the latest installation by artist Wesley Heiss. 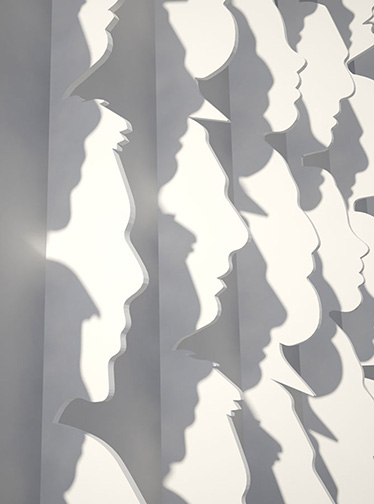 Heiss, associate professor of design in the department of art, architecture and design, is collaborating with artist Marek Walczak on “Facewall,” which features 1,000 faces in steel silhouettes mounted on totems.  Heiss and Walczak were commissioned to install art on the newly built building, and they have developed an installation spanning 42 feet, composed of 82 vertical steel planes, 11 feet high, with silhouettes of faces cut out at the front of each of them. At the bottom are concealed high intensity LEDs that cast light and create shadow between each vertical piece. Sunlight will generate a rich shadow-texture on the surface of the wall and make the experience of seeing the work perpetually new.

"For this project the University was very interested in reflecting the community that was nearby,” says Heiss. “These 1,000 faces of Chico are a response to that and an open reflection of the population. What’s more unique than someone’s silhouette? A silhouette is both a beautifully abstract thing and very specific to each individual. We don’t look at silhouettes as often as you think. Sometimes you can identify who it is but it isn’t as easy as seeing someone from the front. There’s a nice balance there.”

Heiss adds that people of all ages are included in the project. The artists asked volunteers to stand in front of a sheet of Mylar, the used a video projector to cast light onto the sheet, creating the silhouette of the person’s face. Heiss and Walczak then photographed the image on the sheet.

“We took over 1,400 profiles, which unfortunately we had to reduce to 1,000, but we took only one photo per person. There were no retakes because someone didn’t like their photo. That provided some self-editing to the process. It was a little heart breaking because everybody who came was so excited about the piece.”

The artists use Adobe Illustrator and CAD to laser cut the photographed silhouettes from ¼-inch stainless steel. The steel is then sanded to an even silver finish. Every person selected for the Facewall had their photo numbered, so anyone stopping at the wall can scan a quick response, or QR code at the base of the installation with a smart phone which will take the visitor to a legend of the faces.

“If your name is on the list, you can find your silhouette on the wall,” says Heiss. “It’s a key to help find where people are located. We love the democracy of it. The guy who mows the lawns is on the wall in the same way as the president of the university. We didn’t want to know who was who when we took the photos so there’s this real sense of community about it.”

“Facewall” is scheduled for installation in January 2016. 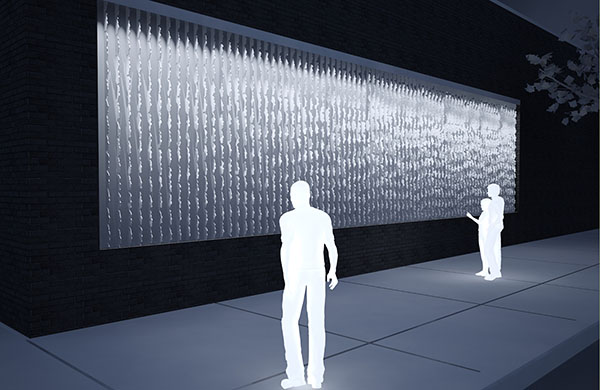