Skip to main content
Friday, February 18, 2022 - 11:30am to 1:00pm
*Lecture will be live streamed only, registration required. Fazlur R. Khan Distinguished Lecture--Stephen J. Ressler, P.E. “The Ashtabula Bridge Disaster and the Advent of Civil Engineering Professionalism” Stephen J Ressler, P.E., Ph.D., Dist. M. ASCE, F. ASEE, is Professor Emeritus from the U.S. Military Academy (USMA) at West Point, NY, and currently serves as President of the Lehigh Valley Section, American Society of Civil Engineers (ASCE). He holds a B.S. degree from USMA, M.S. and Ph.D. degrees in civil engineering from Lehigh University, and a Master of Strategic Studies degree from the U.S. Army War College. Dr. Ressler served for 34 years as a commissioned officer in the U.S. Army Corps of Engineers, including 21 years as a faculty member at USMA. In 2007, he deployed to Afghanistan to develop a civil engineering program for the National Military Academy of Afghanistan (NMAA) in Kabul. He also served for seven years as Professor and Head of the USMA Department of Civil and Mechanical Engineering. Dr. Ressler’s passion is engineering education. He has produced four on-line engineering lecture series for The Great Courses and is a frequent guest lecturer at a variety of venues, including seven cruises. He was the developer and director of the West Point Bridge Design Contest, a nationwide online engineering competition that engaged over 100,000 middle school and high school students. For over a decade, he has served as an instructor for ASCE’s landmark faculty development program—the Excellence in Civil Engineering Education (ExCEEd) Teaching Workshop. He has written over seventy scholarly papers on engineering accreditation, curriculum assessment, faculty development, teaching techniques, K-12 engineering outreach, and information technology. He has received numerous awards, including the ASCE Outstanding Projects and Leaders (OPAL) Award—the society’s highest honor. Abstract: Constructed in 1865, the 154-foot railroad truss bridge over the Ashtabula River in northeastern Ohio represented a unique and innovative response to the challenge of adapting traditional timber bridge-building techniques to a new and fundamentally different structural material—iron. The Ashtabula Bridge served its purpose with minimal problems for eleven years. But on the evening of December 29th, 1876, during a severe blizzard, the structure collapsed under the weight of a routine service loading—a passenger train pulled by two steam locomotives. Tragedy then turned to unspeakable horror, as coal-fired heating stoves in the passenger coaches set the wreckage on fire. Within minutes, many passengers who had survived the collapse perished in an uncontrollable blaze. The official death toll was 92—but the actual number was probably much higher, because there was no reliable count of passengers on the train. The Ashtabula Bridge disaster was America’s worst rail accident up until that time. The event shocked the nation and prompted a rigorous response from the civil engineering professional community. In this lecture, we will examine the unique design of the Ashtabula Bridge, its troubled construction process, and the likely causes of the collapse. We will also explore the surprising impact of this catastrophe on bridge design practice during a pivotal period when civil engineering was undergoing an important transition from a craft-based occupation to a profession 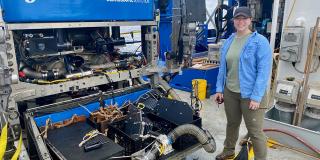