When Sinenhlanhla “Sine” Porlet Zungu arrived on campus last fall, the Umzinyathi district in Kwa-Zulu Natal, South Africa, lost its only trained practicing clinical psychologist -- at least temporarily. But the College of Arts and Sciences has gained a Ph. D. student whose perspective is informed by her experiences with South Africa and a passionate interest in social psychology. 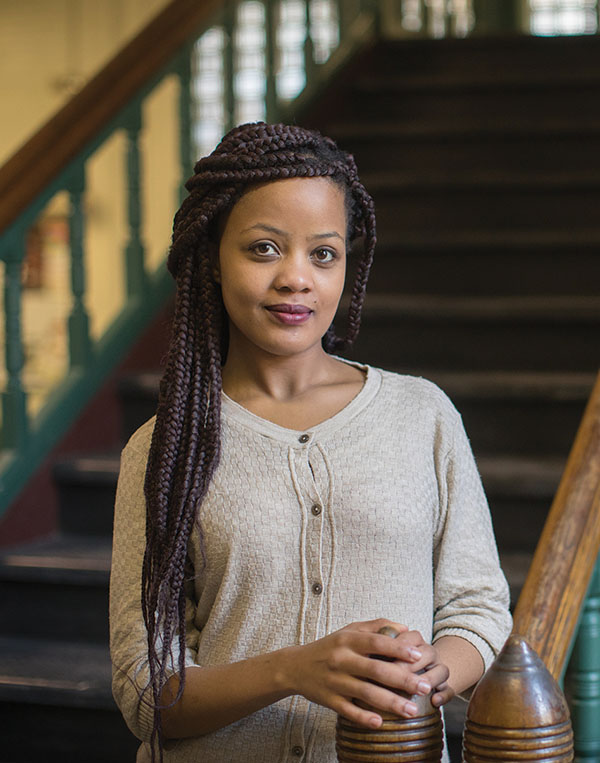 Her new home is in the Blame Lab, or BLAB, as it is sometimes known, on the third floor of the Chandler-Ullman building. There, Zungu and three other Ph. D. students consider how blame is placed, with a focus on how learning the “back story” of an offender can temper the harsher elements of blame responses.

“Untempered blame has negative consequences for health,’’ said the 25-year-old Fulbright scholar. “People who blame harshly are prone to high levels of stress with physical and emotional consequences.” Harsh blame also has negative consequences for relationships and for society, she said. “For those who act spitefully because of the blame they feel toward another, this can create a cycle of ongoing vengeance with both sides trying to make the other suffer.”

The Blame Lab, led by associate professor of psychology Michael Gill, explores how to temper blame responses, or as he put it, “help people blame wisely.” Wise blame, explained Gill, “has been stripped of hatred and spite, while retaining disapproval and a strong sense that offenders are responsible for their conduct.”

The Blame Lab emphasis on quantitative research and experimental methods is new for Zungu. In her first time out of South Africa, she is reflecting on how her experiences there made her more aware of how people respond to human differences, and how addressing the impact of race leads to more honest conversations that result in healing. Her Ph.D. funding is from Lehigh University and the National Research Foundation of South Africa.

Harsh and punitive blame does no one any good and it is important to understand how to get people to blame more wisely.

Acknowledgements of Blame
As a master’s degree student at Stellenbosch University in western South Africa, (with an undergraduate psychology degree from the University of Witwatersrand) Zungu sought out Lehigh after learning about Gill’s renowned work in blame. Her interest was piqued by her experiences at Stellenbosch, and what she observed within a linguistically diverse population.

“South African universities were seen as white space until the democratization of the country in 1994” she explained.

As a black woman in Stellenbosch, she saw that the black students were marginalized linguistically and socially, and her concern became the foundation for her master’s thesis. Black Xhosa-speaking students reported that Afrikaans and English dominated in classes, despite Afrikaans being “the language through which black South Africans were oppressed by white South Africans,” she noted. “This linguistic double-bind leads many students to prefer to be educated in, and align themselves with, English. However, doing so leaves them at a disadvantage, with some members of black South African society seeing them as sell-outs, or called the derogatory term, ‘coconuts.’

“This problematic experience leads to ego disintegration and double consciousness, because you are constantly looking at yourself through the white gaze, while also trying to reconcile that image with who you experience yourself to be as a black person.”

Her study showed that “some participants were able to resist this double-consciousness and ego split by creating for themselves a superordinate identity category where they see themselves as neither black nor white but a hybrid combination that acknowledges the influence of blackness and whiteness on their identities.”

Current work in the Blame Lab, while not growing directly out of her master’s research, nevertheless connects with her broad interest in healing rifts among human beings.

Research related to “historicist narratives,” Gill pointed out, is relevant to Zungu’s home country. “As the apartheid regime came to an end, there was a massive potential for harsh, violent retaliation against whites who had sustained white power and black oppression. Leaders of the black struggle for equality used historicist narratives—focused on how most whites had been made ignorant of the reality of apartheid by endless propaganda—to argue that vengeful responses were unwarranted.”

In light of historicist narratives -- which explain how individuals come to be who they are, as a result of life experience -- people judge less harshly, said Zungu. “Not that you believe a person shouldn’t be held responsible for his or her actions, but rather you believe he or she should be held responsible in a way that does not involve deliberate maltreatment.”

A Systematic Study
In the Blame Lab, research participants learn about offenders by reading news stories or stories created by the researchers, and interacting with trained actors who describe their bad behavior, among other approaches. The researchers manipulate the presence or absence of an offender’s historicist narrative. Then, participants’ reactions are assessed in a variety of ways.

In a current study, for example, they are given a scenario in which a student denigrates peers in an academic setting to the extent that other students are afraid to ask questions in class.  One group receives background on the student’s home life, focused on oppressive and controlling parents. Another group learns only of the bad behavior. All participants learn that they were selected to communicate with “Ethan” about his harmful classroom behavior, and write a paragraph describing what they would say.
Zungu and a team of research assistants coded these paragraphs in terms of the communication style. They found that the styles of those who had received a historicist narrative, and those who had not, differed in that those who had received the narrative adopted a gentler tone, and positioned themselves more as a helpful friend.

“The idea is transferrable to all human beings in all types of social relationships,” Zungu said. “Harsh and punitive blame does no one any good and it is important to understand how to get people to blame more wisely.”

After completing her doctorate, Zungu plans on returning to South Africa and hopes to impact society on a wider scale than individual therapy, as she has done in the past. In fact, she thinks about opening a social psychology research laboratory back at Stellenbosch, further investigating the influence of race, blame and even forgiveness on the human psyche, continuing her interest in healing rifts between individuals and within society.