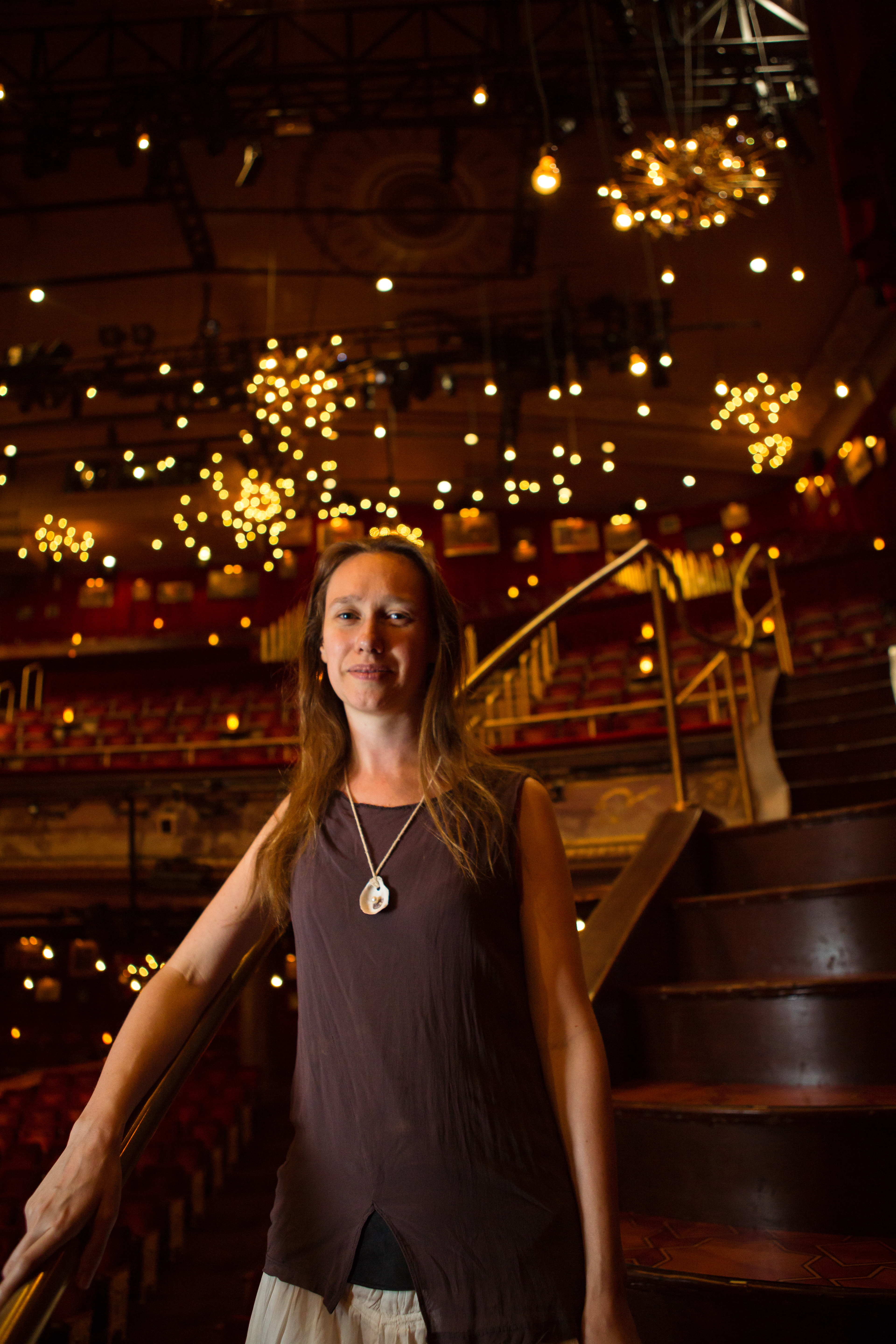 With his 1952 composition 4’33”, John Cage challenged the definition of music by having the pianist close the lid over the keyboard and sit playing nothing for the designated four minutes and 33 seconds. The lid was opened and closed only to designate new movements. At first the piece seemed an act of musical insouciance, and contemporary accounts report that some audience members were indeed miffed. But in silence blossomed a koan—the chance to appreciate the richness of ever-present ambient sound. Cage had devised a way to dissolve for a few minutes the veil between art and life; he later said about his approach to composition that his concerns had become social rather than musical.

A similarly broad spirit of the possibilities for music and performance animates the work of Gelsey Bell ’04.  Her artistic output—which includes performances, theater, songs, musical collaborations and now a role in an acclaimed Broadway musical—almost always has an element that reaches beyond the recognized domain of her medium and into the real-time life of her audience members.

“I was looking for a very balanced liberal arts college experience. Lehigh was perfect for that.”

It would not have taken a Tiresias to foretell Bell’s life in theater and music. Her mother is an accomplished pianist and played frequently in the Northern California home where Bell grew up. Bell took piano lessons as a child, and her nickname in elementary school was “Melody Box” because she sang all the time. In high school she switched from piano to voice lessons, and she traveled east for a summer program at New York University in musical theater writing. While there, she decided she wanted to attend college near—but not in—New York City. “I was looking for a very balanced liberal arts college experience,” Bell said. “Lehigh was perfect for that.”

Bell won a choral scholarship to Lehigh and came to Bethlehem, where she was a dual major in theatre and music, and a minor in philosophy.

“The Humanities Center was quite a bustling place, and many of my most positive experiences from Lehigh were my classes there, spending time with a lot of people who were not necessarily involved in the arts.”

Bell recalls in particular a course taught by her philosophy advisor, Gordon Bearn, that helped her lay the intellectual foundation for her later work. The course centered on Fluxus, an interdisciplinary, rebellious art movement begun in the 1960s that combined the chaotic methods of Dada with often biting sociopolitical commentary. Bell also participated in a philosophy reading group that examined the work of Deleuze and other post-structuralists, along with perennial philosophical themes. “We might take an hour to just talk about altruism. Does it actually exist, and what real benefit does it produce for the world? That was one of the magical things about being at Lehigh, having a space where people in their early twenties, and often from very different backgrounds, could air things like that out,” Bell said.

While Bell had plenty of musical DNA from her mother, her father was a professor of philosophy, and Bell credits in part the academic milieu and erudite banter around the home for the conceptual slant of her art. One of Bell’s first forays into performance was Song Cycle in Time/Space, an alternative campus tour with musical accompaniment featuring a soloist and chorus that walked the audience through different locations—including a bathroom. “The idea grew out of an interest in seeing how, as social beings, we are affected by the architecture and the spaces we're in, and how that changes the musical experience.”

The piece was the prototype for her more recent Bathroom Songs, which Bell has performed internationally. In the performance, Bell invites audience members into a bathroom and does basic grooming tasks like brushing her teeth and hair, interspersing these with solo singing. “I'm very interested in the emotional space of bathrooms, as well as the sonic possibilities. I bring the audience into the bathroom, but some people are of course uncomfortable because it's a small and private space, or they are not sure if they can watch me, or laugh. So I play with those ambiguities, and how they change the situation. It's small in scale and theoretically low stakes, but I think that’s what makes it work.”

Bell has a highly polished singing voice, but in her own compositions she will frequently strip that away in favor of a more elemental approach, exploring the edges of the terrain of vocal utterance. The sounds she creates are sometimes resonant, sometimes vulnerable and sometimes jarring. “I've spent a lot of time learning from the singers around me and also trying various things out. I work with composers who are interested in putting a lot of different techniques in the same space.”

Recently, Bell performed in a Broadway musical, but as you might expect it was not your typical musical. Bell played Princess Mary/Opera Singer/Maidservant in Natasha, Pierre & The Great Comet of 1812, at the Imperial Theatre. It was a staging of a section of War and Peace, but a staging which surrounded the audience with the play. At one point in the show, Bell’s character snagged a man from the audience as a stand-in suitor. The production won two Tony Awards, including the prize for Best Scenic Design of a Musical, a nod to the adventurous way in which the play encompasses the audience. The New York Times called the show “intoxicatingly good,” and dubbed it “the most innovative and the best new musical to open on Broadway since Hamilton.”

Bell’s current dance card is as full as ever. She recently completed her doctorate in performance studies at New York University, and just released Ciphony, an album on which she collaborated with fellow composer and instrumentalist John King. She is an active member of thingNY and Varispeed; both are composer/performer collectives. This summer, she traveled to Kyoto to study Noh theater, and worked there with a Japanese choreographer to develop a feminist re-envisioning of that classical genre. Earlier this year, the Foundation for Contemporary Arts awarded Bell a $40,000 grant in the Music/Sound category. The grant will fund some of Bell’s future projects, including an upcoming solo album.

Culling from a wide range of techniques and styles to create her own performance works, to literally voice those of contemporary composers, and to explore improvisation, Bell performance practices that are not tied to an object-based economy, rethinking the way music and performance can function on a societal level. Like Cage, Bell continues to create music that transports the listener to the moment where he is.