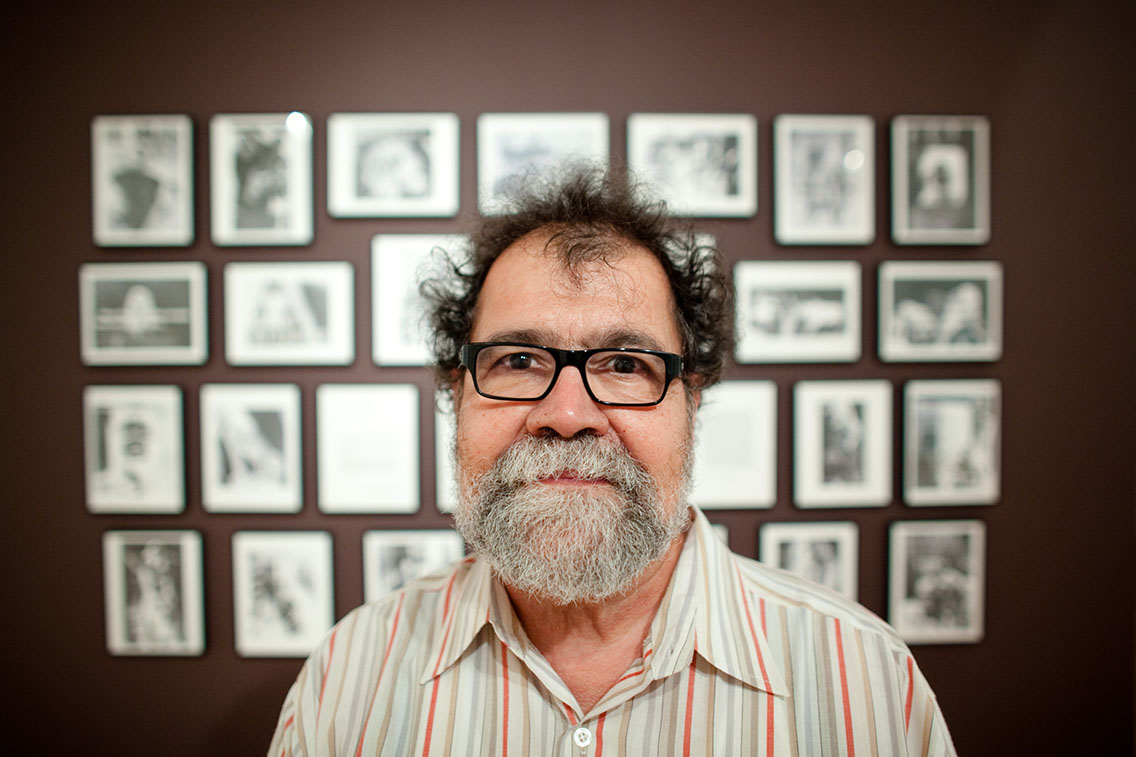 The university’s curator/director of galleries and museum operation organized an exhibit of 56 photographs depicting three centuries in South Bethlehem, filling Maginnes Hall’s four floors with portraits of everyone from a boxer to a football kicker, everything from a farmers market to Bethlehem Steel’s Machine Shop No. 2, an industrial cathedral. He added living color to the black-and-white photos by commissioning a conversation with them by Bill George ’73, a founding member of Touchstone Theatre’s ensemble, who collaborated with Viera in a street version of “Don Quixote.” Performing in the Zoellner Arts Center, George led spectators on a quixotic tour of placement and displacement. At one point he described the Star of Bethlehem, the illuminated landmark on South Mountain, as a sacred/secular symbol of people as “a bunch of light bulbs, trying to be special.”

Viera plans to retire next fall as Lehigh’s resident aesthetic scientist and cultural guerilla guru. His swan-song show, displayed through Dec.10 in Zoellner’s main gallery, contains 21 drawings by Wifredo Lam, the world modernist from Cuba, Viera’s homeland. It’s one of the first cultural exchanges between Cuba and the U.S. since the countries became diplomatic allies in 2015. Three years in the making, it was seeded 20 years ago during Viera’s first trip to Cuba in 35 years.

For five decades Viera has been imprinting Lehigh with his protean personalities: son of a Cuban tailor; graphic designer; printmaker; installation artist; baseball fan; gourmet cook; bonsai tender; operatic singer; husband of a Cuban classical pianist. "I am a very curious individual,” he says during a lunch chat, his soup thick with Malaysian noodles, his voice thick with a Cuban accent undiminished by 55 years in America. “I love to solve puzzles; I love to complete mazes. I love to teach, and reach, people with new ideas, unfamiliar ways of looking at familiar things, passion and compassion. I love to work with, and learn from, the best. Life humbles me, and I love that.”

Viera’s early years at Lehigh were quite humbling. One of his first offices was a closet in Chandler-Ullmann Hall that resonated with the fumes of a former organic chemistry lab. His first major role was emergency caretaker. He moved paintings from the University Center to the Allentown Art Museum to save them from student projectiles of brussel sprouts, spoon-launched pats of butter. “anything that was round, by the pound.”

Viera quickly began making Lehigh’s permanent collection significantly bigger and dramatically better. Armed with a minor budget and major ambition, he became an expert negotiator. He exchanged oversized prints from an incomplete portfolio of William Henry Rau’s 19th-century photographs of the Lehigh Valley Railroad discovered in Lindermann Library for pivotal photos by such pioneers as Julia Margaret Cameron and Diane Arbus. In 1976 he received a portfolio of American masters including Weegee and Weston. A gift from photographer and Academy Award winning filmmaker Lou Stoumen ‘39, a native of nearby Hellertown, it was Lehigh’s first group of teaching images.

Nearly 40 years later, Lehigh’s photo collection is prized for its diversity of subjects and styles, formats and donors. Viera has accepted donations of celebrity Polaroids from the Andy Warhol Foundation and Cartier-Bresson prints from George Stephanopoulos, the TV news anchor and former White House communications director. He has a particularly rewarding partnership with Richard Thall ’55 and his wife Alice, owners of an extremely wide range of boundary-pushing pictures. The couple’s gifts make up a Viera-curated exhibit of images by Aaron Suskind, the highly influential abstract realist. Installed through Dec. 10 in Maginnes Hall, the show includes some of the 45 Suskind prints that the Thalls donated to honor Viera’s 45 years at Lehigh.

Viera has put Lehigh on the map of adventurous Latin American art, using his leverage as a guest curator for the Smithsonian Institution and a cultural envoy for the U.S. State Department. One of his most impressive efforts was “Viajeros (Travelers),” a 2005 show of 142 images and seven videos of Cuba by North Americans, including Cuban expatriates. The project began when several photographers asked Viera to organize an exhibit before Cuban President Fidel Castro died and the communist country opened to capitalism. The request was very satisfying to Viera, who left Cuba for Miami in 1962, one of 14,000-plus children of anti-Castro parents imported during Operation Peter Pan.

Viera has also made Lehigh a hub for funky folk works by self-taught, visionary outsiders. Collaborating with Norman Girardot, retired professor of religion studies and a fellow Falstaffian figure, he’s organized exhibits, installations and residencies by the late Mr. Imagination (aka Gregory Warmack), who made scepters and thrones with bottle caps, and the late Rev. Howard Finster, who made amazing mazes featuring space ships, herringboned angels and a baby prophet named Elvis Presley.

Girardot toasted Viera during a celebration of the latter’s 40th year at Lehigh. “As Ricardo says, what he collects are not just things. Rather, he is creating a multifaceted laboratory of ideas and different ways of envisioning the world, all available to those who still have enough curiosity to care about the interrelated strangeness of it all. And, you know, that’s not a bad general definition of a university.”

Art allows Viera to moderate a universal university. He encourages conversations between viewers by suggesting conversations between objects, by turning objects into characters. For the 2008 show “Vernacular to the Masters” he paired works by renowned photographers with anonymous snapshots. In the process he created a self-portrait of humanity, a paper playground for mortality and morality. For “The Bridge: A Journey Through Illness,” a 2004 installation by two physicians, he designed a practical, transcendental facsimile of a hospital for a fictional woman dying from cancer. The centerpiece was a poem chalked on the floor with one vibrating red line: “I am molecules breaking apart.”

“I like to create parallels, and parallel universes, by balancing time, era and environment,” says Viera. “I like to take the weight off artists and put it on viewers, so they can not only see what artists produce, but feel what they induce. You can learn what is right and what is wrong, and if there is a right and a wrong.”

Viera challenged notions of wrong and right in a 2004 exhibit of Larry Fink’s 48- by 48-inch photos comparing members of President George W. Bush’s cabinet to prostitutes, clowns and other sordid figures in pre-Nazi Germany. He chose the pictures because they were the first color images by a master of black-and-white social commentary, and because they were “well-composed political cartoons” based on paintings by Max Beckmann, George Grosz and other notorious German Expressionists.

“The Forbidden Pictures” immediately became an international sensation, spurring a furor extending to the talk show of Bill O’Reilly, the popular pundit. Conservatives denounced Fink as a lunatic and a heretic. They were especially offended by his portrait of a smiling Bush lookalike fondling a laughing, lingerie-clad lady on his lap. Viera was castigated as a traitor and a terrorist. Geographically challenged critics demanded his deportation to Mexico.

Wanting to protect his friend from further abuse, Fink urged Viera to close the show early, a radical proposal from someone who swats controversy like a pinata filled with hornets. Viera’s response—“Over my dead body”—strengthened his admiration for Viera as an intellectual dragon slayer.

“Ricardo wants to break through the status quo into real thinking and impulses and feelings,” says Fink. “How often do you stand with a person and have a decent intellectual conversation and feel like you’re being hugged?”

Since then Viera has engaged in many intellectual embraces. In 2011 he curated an exhibit of photographs by women to celebrate the 40th anniversary of the admission of female students to Lehigh. There were so many styles and subjects, the exhibit was less about gender and more about the democracy of photography. In 2012 he marked the re-election of Barack Obama with West African shop-advertising portraits of America’s first African-American president as a tribal king, superhero and friend of Tupac Shakur, the martyred rapper. Partnering again with Norman Girardot, he staged a show that was part coronation, part carnival and all Obama-rama.

Three years ago Viera began planning an exhibit fusing his present to his past.  He grew up in Cuba admiring Wifredo Lam’s dynamic blend of abstractionism, surrealism and Afro-Cubanism. His admiration grew in 1997 when he discovered a private collection of Lam drawings in Havana while serving as a Spanish-speaking consultant to a Philadelphia organization’s cultural bridge-building project. He became a Lam advocate in 2015, after Cuba and the U.S. established better diplomatic relations. That year he started a series of intricate, intense negotiations with the drawings’ owner, Lam’s grandnephew Juan Castillo Vasquez; the Lam Foundation in Paris, which is run by the artist’s son Eskil, and the Cuban government, because Lam is part of the Cuban National Patrimony. The byzantine, sometimes bizarre process confirmed Viera’s view of his homeland as a surreal home for dictators, major-league baseball players, and drivers of American cars from the ’50s. .

Viera regards the Lam show as his Lehigh swan song. He pauses to contemplate what he’ll wear to the opening reception. “Should I,” he says with an impish grin, “dress like a swan?”